Oxenefordscire contains 22 Wealth Locations in Assassin’s Creed Valhalla (ACV). This walkthrough will guide you to all Wealth Locations in Oxenefordscire Territory and how to get them. None of the Wealth Collectibles are missable (since Patch 2.00). You can still return to all maps after the story but it’s recommended to collect everything as you go through the regions to level up.

Wealth Collectibles get marked by golden icons on the world map automatically when synchronizing the viewpoints. Wealth includes the following types of Collectibles: Ingots, Gear, Abilities, Cargo. Usually they are chests containing gear and upgrade materials used to improve your character. Finding all Wealth items is needed to complete all Territories for the Completionist All the Way! trophy or achievement.

Also in this region:

The Wealth will be a Nickel Ingot carried by one of the cutthroats in Linforda.

The Wealth is in the large church in Saint Albanes Abbey. Climb up to the window above the main door, and shoot it out with your bow to get inside. Drop down and break the lock on the front barred door so you can go back outside.

Just east of the main entrance is a stall that has fire pots in them. Pick one up and go back inside the church.

Inside there will be a breakable wall. Throw the fire pot at the wall to destroy it and reveal the Wealth chest.

The Wealth is in a building around Saint Albanes Abbey

The Wealth is in a building around Saint Albanes Abbey.

The Wealth is in a building around Evisham Abbey. 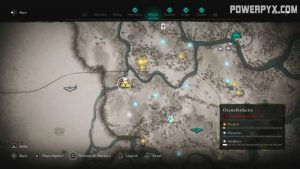 The door will be barred, so go around the back of the building and smash through a weak point in the wall to gain entry.

You’ll find the chest on an upper level that you’ll have to climb up to.

The Wealth is in a building around Evisham Abbey.

The door is locked, but the key is being carried by a Standard Bearer in the area.

The Wealth is in a church in Evisham Abbey.

The Wealth is in a building in the village of Perie.

The house will be locked. Use your raven to locate the key a short distance away.

The key will be in front of a house, hidden behind a movable boulder.

Stop by the house just south west of the ingot to find fire pots, then go back to the locked door.

Unlock the door, go inside and you’ll find a breakable wall blocking a staircase into the basement. Use the fire pot to destroy the wall, then claim your rewards.

The Wealth is in the village of Buckingham.

The door to the church is locked. Find the key, just outside on a bench in front of the locked door.

Once inside, look up to see a ladder that is out of reach. Shoot the pulley to lower it, then climb up to the floor above.

You’ll find the Magister’s Vambraces in a chest in the corner.

This Wealth is in a house in the woods guarded by a Goliath. 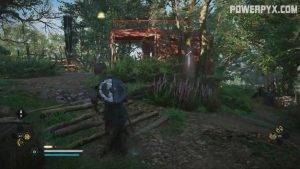 The key to the chest is on a table inside a tent just to the north of the house.

This wealth is in the Leah Villa Garrison in room with a barred door. Shoot the lock through a window from the outside. The room is only accessible through a locked room as you’re getting Wealth #13.

This wealth is in the Leah Villa Garrison in a locked room.

Find the key on a table in the large building on the east side of the courtyard.

Unlock the door and you’ll find the Tome of Knowledge straight ahead of you, and the door to get Wealth #12 on your right.

This wealth is in the Leah Villa Garrison, on a soldier in the room where you found the key to Wealth #13.

To gain access to that building, go past the barred door, and climb the ladder.

At the top of the ladder, look to your left to see a movable barricade. Slide the barricade to the left to reveal a window you can use to get inside the building.

Once inside, smash the lock on the door, then pick up one of the fire pots that are in the room.

Go back to the breakable wall and destroy it with the fire pot. Inside, you’ll find a loot chest with Magister’s Robes inside.

This Wealth is in Oxenforde.

Look up at the tower in this area, and shoot out the stained glass window above the beam with an arrow.

Climb up and go through the broken window. Look up and you’ll see a breakable panel in the ceiling that you can shoot with an arrow. Climb up to the floor above.

There will be a movable barricade in front of you, but there is an obstacle blocking it from moving. Look up to see a breakable pulley attached to a chandelier. Shoot the pulley to drop the chandelier which will destroy the obstacle behind the barricade.

Push the barricade into the room, and climb over some obstacles to reach the chest.

Immediately below Wealth #16, you’ll find another barricade that you can move to reveal a hole leading to the room below.

In this room you’ll find a key. Pick it up, then smash the lock on the barred door to go outside.

Head north of the tower to find a locked building that you can now open. Inside will bee the Book of Knowledge.

This Wealth is in the Derelict Shrine of Camulus.

There is a crack in the wall on the west side of the shrine that leads inside, however the chest needs two keys to open. The first is in a small building north of the shrine.

Climb up to the roof of the building and you’ll see a breakable floor section and a cache of fire pots.

Use the fire pots to blow open the hole and drop down into the building. You’ll find the key at the foot of a tall statue in a pot.

The second key is on top of a pillar at the edge of the shrine. Use your raven to find it easily, then climb up and grab it.

With both keys in hand, go into the crack to find the chest in a dark room below the shrine.

This Wealth is in Evinghou Tower.

Climb up the northwest side of the tower, and you’ll see a boarded up window that you can smash to gain entry.

Inside you’ll find a Goliath that is carrying the ingot.

This Wealth is in the village of Hammeham.

The Wealth is behind a locked door. Find the key in a small building just west of the door.

Inside the building, the key will be hidden under a movable barricade. Slide it to the left to reveal it.

Open the locked door to reveal the Wealth chest containing the ingot.

This Wealth is right on the outskirts of Lunden, in Crepelgate Fort.

You will see the waypoint inside a guard tower, but the entrance is barred. Instead, circle around the tower until you find a wooden structure attached to the side of the tower.

Go beneath the wooden structure and you’ll see an uncovered window above you that you can use to enter the tower. Climb up and go through the window.

Inside, slide a movable barricade aside to find a hole in the floor you can use to enter the room below where you will find the Book of Knowledge.

This Wealth is in Cyne Belle Castle. You must advance the Oxenefordscire until you conquer the castle. Then you can enter the main room through the big castle door (ground floor).

That’s 100% of the Wealth Collectibles you can find in Oxenefordscire Region of Assassin’s Creed Valhalla (ACV).

For all other Wealth check out the complete Assassin’s Creed Valhalla Wealth Guide. For the other Collectibles in this region check out the Mysteries Guide and Artifacts Guide.