Snotinghamscire contains 17 Wealth Locations in Assassin’s Creed Valhalla (ACV). This walkthrough will guide you to all Wealth Locations in Snotinghamscire Territory and how to get them. None of the Wealth Collectibles are missable (since Patch 2.00). You can still return to all maps after the story but it’s recommended to collect everything as you go through the regions to level up.

Wealth Collectibles get marked by golden icons on the world map automatically when synchronizing the viewpoints. Wealth includes the following types of Collectibles: Ingots, Gear, Abilities, Cargo. Usually they are chests containing gear and upgrade materials used to improve your character. Finding all Wealth items is needed to complete all Territories for the Completionist All the Way! trophy or achievement.

Also in this region:

This Ingot can be found in the North of the region, in the town of Hemthorpe. At the back of the section of town, you will find a well. Destroy the cover and jump down to unlock the chest inside.

This Wealth can be found in the North of the region, just by the Odin Mine Hideout. Once at the top of the hill, you will see a large drop. Jump down and follow the cave through until you reach the main inside section of the enemy camp. Along the right side of the cave you can find a stack of junk that you should move out of the way.

Just next to there is an exploding vase, pick that vase up and carry it along the path which you just opened up. When close to the blocked door, throw it at the door to clear the way. Head into the next part of the cave and use the raft and scaffolding to reach the ice wall. Break it with your weapon to find the Book of Knowledge on the other side.

From the Wealth location above, head back to the central camp room and move the stack of junk to the edge of the platform, next to the water. Jump to the platform in the center of the room to find the Ingot in the chest.

This Ingot Wealth can be found in the West of the region, at the Berserker’s House. Head around the side of the house and shoot the lock barring the door through the window. Inside the house, you can find the chest.

This Wealth can be found in the West of Snotinghamscire at Stoneburgh. Climb up the outside of the large circular structure and jump down inside to the second level to find the chest with the Ingot.

This Ingot can be found in the center of the region at the Maneis Outpost. Once inside the outpost, climb up the central structure and assassinate the enemy inside to get the Ingot.

From the Ingot above head to the door where you exit and look to your right to see a wooden fence. break the fence with your weapon and then walk all the way around to collect the Wealth from the chest.

This Wealth can be found along the Eastern border of the region, just along the Maun River. Once in the hideout, head to the large hut at the back of the area and jump in through the window to find the chest.

This Ingot can be found in the fort, just North of the Tip of the Spear location. Climb the large tower in this fort and head to the small balcony leading into a room. Inside this room, you can find the Ingot. You will need to kill all the enemies and pick up the key from one of them first.

Head back down to the bottom of the fort and climb up to the open window on the left side of the building.  Inside you will find the ability.

This Ingot can be found right next to a Cursed Symbol in the south of the region at Minninglow. Just outside of the forest, you will find a couple of caves leading down underneath the hill. Take the one on the right and follow the cave all the way along. Partway along, you will find a key, slide under the rock to pick it up and continue onwards. Eventually, you will reach a door. Unlock it with the key you got to find the chest on the other side. 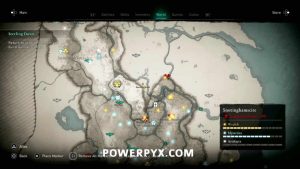 This Wealth can be found in Sherwood Hideout. Go to the southern side of the camp and climb through the gap in the fence. Turn to your left and head inside the building to find the chest.

This Ingot can be found on the outskirts of the town of Snotingham. Here you can find a well and much like all the others, destroy the cover and jump inside to find the chest.

This cargo can be found at the Southern tip of the region, in Wenloch Abbey. You will see the Abbey in the town, thanks to its large structure. Raid the location and have your teammates help you open the door. Do the same thing on the door inside the Abbey to find a crypt. Head down into it and kill the enemies to find the first chest.

This cargo can be found at the Southern tip of the region, in Wenloch Abbey. From the chest above, continue down into the crypt and kill the next set of enemies to find the chest up against the wall.

This cargo can be found at the Southern tip of the region, in Wenloch Abbey. From the chest above, look around the corner to find a hole in the wall. Slide under it and kill the remaining two enemies and pick up the key from one of them. Unlock the metal door in the room and proceed forward. Kill the remaining enemies and open the chest at the end of the crypt.

That’s 100% of the Wealth Collectibles you can find in Snotinghamscire Region of Assassin’s Creed Valhalla (ACV).

For all other Wealth check out the complete Assassin’s Creed Valhalla Wealth Guide. For the other Collectibles in this region check out the Mysteries Guide and Artifacts Guide.