Far Cry 6 has 19 Rooster Locations. Finding all Roosters unlocks the Recrooster trophy or achievement. However, for the trophy only the 13 collectable ones are required, the 6 that are rewards from Ubisoft Connect (online) aren’t needed for the trophy.

The Roosters are a type of Collectible and can be used in the cockfighting ring in Montero Farm, the main camp in Madrugada region. Each of them is playable by you in the cockfights where you must attack and doge other roosters. In the Rooster selection at the cockfighting ring you can scroll over their names to get a hint where they are found. They aren’t marked on the world map by default, but if you are online and connected to a Ubisoft Account, you should receive 300 Far Cry Credits after leaving Libertad Island, which you can use in the Utilities section of the in-game online store to buy a map for them.

Roosters get marked on the minimap (HUD) by a white crate icon when you get close to them:

. They are all inside wooden crates with a rooster icon on it.

None of the Roosters are missable. You can still find all of them after the story in free-roam. You can keep track of which ones you’ve found under Collection > Roosters. Two of the Roosters are tied to Side Quests (Yaran Stories) but the others can be found at any time in the open world.

It’s best to clear the map of Anti-Air Cannons first, then you can use the Airdrop function to quickly fly to each of their locations.

Rooster #2: El Dorado
Can only be collected during or after Yaran Story “Spur of the Moment“. It’s accepted from the guy that’s standing at the cockfighting ring. Then the quest makes you go to an underground bunker which contains the rooster in a chest as usual. The bunker can only be opened after you have accepted Spur of the Moment and it stays opened after this forever. Without the quest the key at the bunker entrance wouldn’t spawn so you wouldn’t be able to enter it. The first 3 images below show the quest start, the last 3 images show the rooster location at the bunker. The path inside the bunker is very linear so it’ll be easy to spot, just listen for the rooster sound.

Rooster #3: Acero
Search near a thatched-roof shack on the eastern outskirts of Verdera. In the east of Verdera town.

Rooster #4: El Aguila
Search along a magote cliffside near the Cortina River in Serpentino Park. It’s on top of a mountain in Costa Del Mar. Easiest option is to fly up there in a helicopter or by Wingsuit. 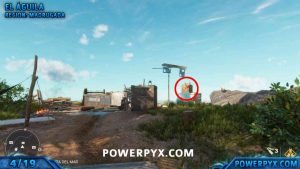 Rooster #6: El Pico
Search a chicken farm south of the Botanical Gardens of Yara. In a yard with a dead pig, behind a blue house.

Rooster #7: El Fénix
Search under a covered stable in a gated community west of Muerte Point.

Rooster #9: El Huevo
Search the cliffside Local La Joya PDP Offices in Mirador Cape. At the enemy area, climb in through the roof (can use grappling hook on side of building), or alternatively shoot off the lock to the fenced area inside the building.

Rooster #10: El Gallo Magnifico
Automatically collected during Yaran Story “Everything to Lose“. Cannot be obtained outside of that quest.

Rooster location during “Everything to Lose” (you will be asked for quest purposes to pick up the key in the house across from the rooster, then use it on door to get to rooster).

Rooster #12: La Bala De Plata
Found under the watchful eye of Reinaldo at Álvarez Farm on the Vacia Coast. On the back of a cart, blending in with the leaves of plants.

Rooster #13: La Bestia Blanca
Search inside the Casas del Lodo Residences in Esperanza. You must enter the house with the rooster in it as part of Treasure Hunt “The Last One to Leave“.

That’s all 19 Roosters in Far Cry 6. After finding the first 13 you should have received the Recrooster trophy or achievement immediately, no need to use the Roosters in cockfights.

Guardians of the Galaxy Trophy Guide