The Cost of Iron is unlocked when you’ve found it in the open world.

Starting Location: The Cost of Iron 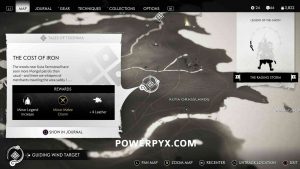 Inside the house will be a number of injured peasants, who will tell you about a merchant who deals with the Mongols. They want his iron mark.

Search for the merchant cart

Not much of a search when they give you a waypoint for the target. Head for the waypoint to find a massacre.

Examine the bodies in the area.

Next look at the actual cart.

Return to the wounded men

Jin fears that the Mongols are searching for the wounded men. Rush back to the house.

Talk to the peasant who gave you the quest.

Look for the tracks outside.

Follow the tracks until you reach a house where the bandits are holding the merchant.

Search for the merchant

Spoiler alert, he’s inside. But you’ll have to kill all the Mongols in the area before you can save him.

Once you have cleared the area, free him from his captivity.

Speak with the merchant

Looks like the merchant was blackmailed into working with the Mongols, and his brother has paid the price. How tragic.

This finishes The Cost of Iron quest in Ghost of Tsushima.