Ashina Castle is the 4th area in Sekiro Shadows Die Twice. This walkthrough will guide you through the Ashina Castle region.

Starting From Ashina Castle Gate Idol in Ashina Outskirts keep following the only path, while fighting or running away from the enemies. At the castle gate itself you will encounter a boss you can’t skip: Blazing Bull. 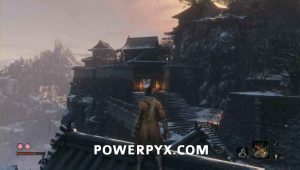 When he charges at you it is better to dodge forward to get behind him for a few hits, additionally use firecrackers to stun him for a brief moment for a hit or another one. He tends to stand in place for a while as well, when he does dodge twice behind him to avoid being hit. After defeating him you will be able to open the gate and right in front of you will be the Ashina Castle Idol.

The area has a lot of ways to go and can be a bit confusing. When going up the stairs you will see a group of riflemen and a miniboss enemy that looks like a big armored samurai. Climb on one of the roofs on the left side for a stealth attack on the miniboss General Kuranosuke Matsumoto. Take care of his guards afterward before dealing damage to his second health bar. This is completely optional but will grant you a Prayer Bead if you defeat him.

From there head to the rooftops to the right side of the stairs and keep jumping from roof to roof. To describe it as easy as possible you will need to reach the highest roof on the right in order to reach the rooftops of the middle section behind General Kuranosuke Matsumoto. Once you are on the roofs of the central tower (which is also the tallest tower on the map so it’s easy to see), run around to the left and you will find an opening you can grapple into. There you will find a chest with a Gourd Seed as well as the Upper Tower – Antechamber Idol.

Once inside you will encounter a new type of samurai enemy that wear blue robes. There’s a room where two of them are patrolling, you can take them out with backstab attacks. You will also find a locked door here. To open it, head to the rooms on the right side where 2 blue robe samurai are sitting on the floor. In that room there’s a hole in the ceiling, this can be easy to overlook. Grapple your way up through the opening in the ceiling in order to reach the other side of the closed door.
Side Areas of interest: You can drop down the inside of the tower to find the Sabimaru upgrade for your prosthetic arm in a chest. In the same room at the bottom you will find another Chained Ogre mini-boss very late in the game (not spawning yet), keep that in your memory. 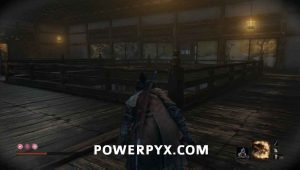 Follow the way upstairs and you will find the Upper Tower – Ashina Dojo Idol and a non-optional mini-boss: Ashina Elite – Jinsuke Saze. He deals a lot of damage but has weak posture so use this info to your advantage. Bonus Info: Late in the game another mini-boss: Lone Shadow Vilehand spawns here, keep that in memory as well.

After defeating him head through the window in the room to reach the top of the castle where a main boss awaits: Genichiro Ashina.

The best tactic against him is to keep pressuring him, it is better for you to start the offensive. Always attack once, then deflect his attack and repeat until his posture breaks. Deflections are key to this fight. Once you take both of his lives he will transform into a second phase with additional attacks but luckily with only 1 health bar. Once done you will unlock the Castle Tower Lookout Idol.

In the room after the Genichiro boss talk to Emma and Kuro. To Kuro (the Divine Heir) you must talk twice then look at the incense burner next to him. Then talk to him three more times until he walks you over to a window to climb out of. He will tell you to follow some smoke signals on the roofs, be sure to talk to him until he tells you this. Then get out the window and follow the smoke signals across the rooftops to find Isshin Ashina (image below shows the room where to find him). 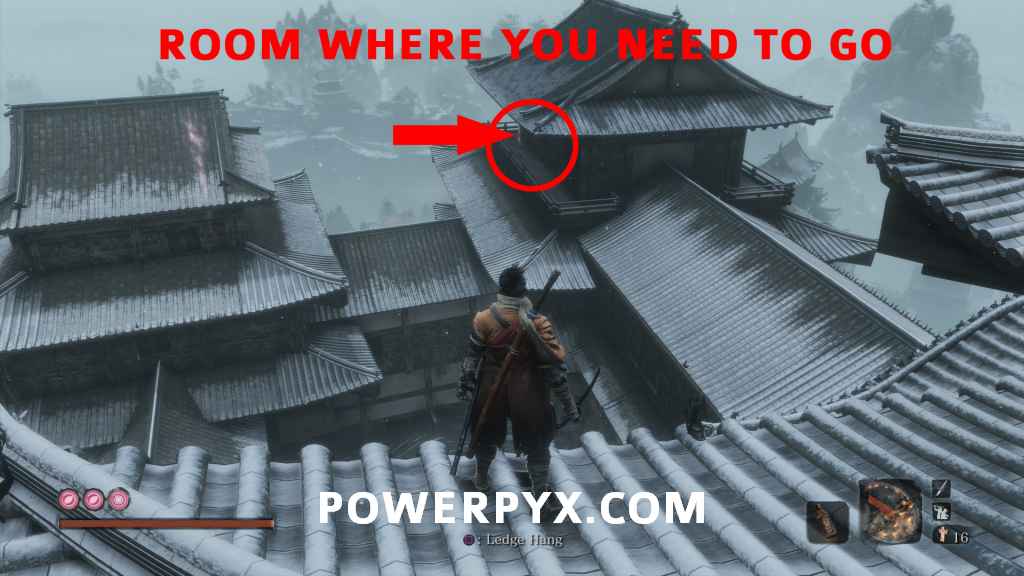 If you find Isshin’s Letter (item) instead of Isshin himself (old man) then that means you haven’t talked to Kuro enough times. In that case return to Kuro and keep talking to him until he walks you over to the window in his room and tells you to find Isshin. Only then Isshin can spawn!

Talk to Isshin and return to Kuro’s Room to talk to Emma. Emma disappears from the Dilapidated Temple but you can give her Gourd Seeds for upgrades in Kuro’s Room now. Talking to Isshin Ashina is also mandatory to advance through the next area Senpou Temple, Mt. Kongo which you will reach through the Abandoned Dungeon.

When you return to Kuro’s room also be sure to pick up the Gun Fort Shrine Key as you will need this to advance through the Sunken Valley region.

Our main tasks in this area are all done but we have some side areas left to explore and optional bosses to defeat.

Backtrack to the Upper Tower – Antechamber idol and drop down the inside of the tower. On the bottom floor there’s a chest with the Sabimaru prosthetic tool and a gate on either side that you can open. Head outside the gate closest to the Sabimaru chest to reach an outside area with a pond. On the right side there’s a spear enemy, past him you find the Old Grave idol. 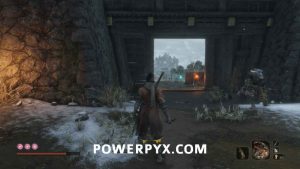 From the idol you can drop down the cliff to a building with a broken rooftop below. Drop through the roof, inside you find a hidden merchant that sells a skill called Anti-Air Deathblow which is very powerful. Explore the rest of the area down the stairs and pick up the many items that you find along the way. Most of them are basic consumables, the most interesting thing here is some Black Gunpowder at the bottom of the stairs.

From the Old Grave idol, go across the bridge where the spear enemy is. There are two guards standing on the bridge that you can eavesdrop on, but you can run past them. This leads to an area with lots of bushes and some monkeys. Go right past the monkeys and you’ll reach the Old Serpent Shrine idol. The next section leads to the Sunken Valley but that’s a higher level area we’ll come back to later. Let’s explore the rest of Ashina Castle for now. 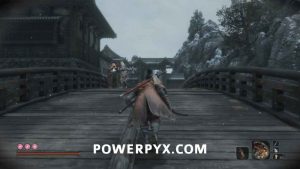 Remember the prologue area where the game started? We can get back there. Teleport to the Ashina Castle idol (the 1st one in this region). This time, take the path to the left of the idol and open the big doors there. Then drop down and you’ll see the Ashina Reservoir idol in front of you.

There’s an area with two big hammer guys walking around and a lot of riflemen. From this area we can find two minibosses Seven Achina Spears – Shikibu Toshikatsu Yamauchi and Lone Shadow Longswordman.

First we’ll take on Seven Achina Spears – Shikibu Toshikatsu Yamauchi: He’s found upstairs to the right side of the two big hammer guys. He’s at the temple where we first met the Divine Heir in the prologue. An easy way is to backstab him in stealthily. To do this, you need to grapple to the tree branches to the left of the Ashina Reservoir idol to land between a rifleman and drummer. Kill the drummer and then crouch under the building where the tall grass is. It’s the same path you took in the prologue and leads to the cliffside. Climb up the cliff to enter the hole in the building behind the Seven Spears boss. He has a lot of health so it’s better to focus on breaking his posture instead, by deflecting and attacking quickly.

Next we’ll take on the Lone Shadow Longswordman miniboss. From Ashina Reservoir idol, grapple on to the two tree branches on the left so you land between the rifleman and drummer in the enemy fort. Behind the drummer walk up to the cliff and look to your right. There you can grapple on to another cliffside and find this miniboss in an old well. You can drop onto him through a hole above him, for an easy stealth takedown. Behind this boss lays the path to the Ashina Depths, a high-level area for later. For now you can ignore this path.

Backtrack to the Ashina Castle idol once more (the 1st idol in this region). From there, jump off the left side of the bridge where an old woman sits, and grapple the tree branch. There are two enemies on a bridge that you can eavesdrop. Run across the bridge behind them and jump across the temple roof, then you find the Abandoned Dungeon Entrance idol. This puts us on the correct path to the next main story area. 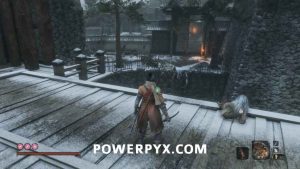 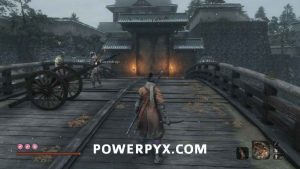 Areas After Ashina Castle – Where to go Next

There are 3 main areas directly connected to Ashina Castle. It can be a bit confusing where to go after Ashina Castle or how to reach these areas so here’s a quick breakdown:

How to reach Abandoned Dungeon & Senpou Temple, Mt. Kongo: This is the next story area we need to head to. It’s described the last paragraph above. From the Ashina Castle idol, jump on off the left side of the bridge where the old woman prays and hang on to the tree branch. Then cross the bridge with the two enemies and you’ll reach the Abandoned Dungeon entrance. Run past all enemies until you need to swim through water. In this section you find an elevator. Take the elevator to get to Senpou Temple.

How to reach Sunken Valley: This area comes directly after the Serpent Shrine idol, just jump down the cliffs there. We will go there after Senpou Temple.

How to reach Ashina Depths: This is the best hidden area. After the Ashina Reservoir idol, you can swim through the well where you fought the Lone Shadow Longswordman miniboss. This leads you to a dark area with a woman praying at a cliffside in a dark underground section. You need to jump down the cliff where the woman prays and latch on to grappling points as you’re falling. We will go there after Senpou Temple.

This concludes the “Ashina Castle” area.

Next up: Abandoned Dungeon

For all other areas check out the full Sekiro Shadows Die Twice Walkthrough.

The Last of Us Remake Trophy Guide