Sunken Valley is the 8th area in Sekiro Shadows Die Twice. This walkthrough will guide you through the Sunken Valley region.

You reach the Sunken Valley via the Ashina Castle region. From Ashina Castle’s Old Grave idol, go across the bridge where you can eavesdrop on two enemies and through the snowy area where you get attacked by monkeys. Afterward, you reach a shrine area and can grapple on to the cliffs up ahead, from there drop down to the Under-Shrine Valley idol.

From the Under-Shrine Valley idol, jump down the hill and grapple to the cliff where one new type of rifleman enemy stands.

Behind him, take a left turn to grapple onto a tree branch above you, and from there to the next tree branch where another single rifleman stands.

From that platform turn right and drop down to a cliff below.

Grapple onto the next hillside and follow the path until you can hug a wall. Climb around that wall.

From there you come to an area with lots of enemies and the Sunken Valley idol is also found here. 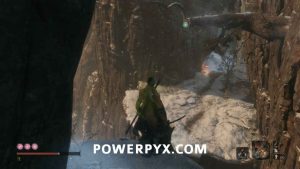 Here the path gets a bit more obvious again. Grapple from platform to platform and you’ll encounter the Snake Eyes Shirafuji miniboss. It’s actually easier to ignore him for now and advance to the Gun Fort. Then you can backtrack to do an easy stealth takedown on the boss. When you first see him it’s impossible to stealth him.

To the left of the boss you can climb the wall or simply grapple the tree stump.

Now we have a huge gun fort in front of us with lots of snipers shooting our way. To avoid them, run quickly (you can run by holding

If you don’t want to deal with all the enemies, just run past them for now. Inside the gun fort, in a dark tunnel, you find the Gun Fort idol.

In the room right after the Gun Fort idol you will encounter the Long-arm Gentipede Giraffe miniboss. You could already fight a Gentipede earlier in Senpou Temple and this is the exact same principle. Deflect all consecutive attacks. After perfectly deflecting two attack chains it will break the boss’s posture and you can execute it. Repeat to take down its second health bar.

After defeating the boss, the white fog behind it will clear. There’s a monk statue and some items here. Behind the monk statue is a big door / gate. You must open this door to advance.

If you can’t open the locked door in Sunken Valley after Long-arm Gentipede Giraffe: If you are stuck in Sunken Valley and can’t open the gate to advance, it’s because you’re missing the key item Gun Fort Shrine Key. You get the Gun Fort key Ashina Castle, Kuro’s Room. After completing the Ashina Castle region, Kuro will open up the library and the key is a normal item pickup (golden orb on floor). Refer to the Ashina Castle Walkthrough to complete that region first. To give you the short breakdown; you have to defeat Genichiro Ashina, then talk to the Divine Heir 5 times in his room, follow the smoke signals across the tower roofs to find Isshin Ashina and talk to him. Then Kuro opens the library and the Gun Fort Shrine Key can be found there. Below are screenshots of the key item and the door that you must open in the Gun Fort.

With that door open, follow the path ahead and you’ll get attacked by a big snake. Then you fall down into water. Swim through the lake and on the other side you see the Riven Cave idol.

Grapple up to the tree branches above the Riven Cave idol until you reach some huge monk statues with their hands stretched out. You’ll want to grapple from one statue to the next until you reach the Bodhisattva Valley idol at the end. Don’t drop down to the poison lake area, that’s just an optional path to the Ashina Depth and not a concern for now.

From the Bodhisattva Valley idol, jump down the cliff and you’ll encounter the Guardian Ape main boss. He’s a tough fight consisting of two phases. The good news is that he can’t block your attacks, the bad news is that he does a ton of damage. In the first phase his grapple attacks are the most dangerous. Jump up to avoid being grabbed when the red icon shows. Firecrackers work well to stun him but it only stuns him every 15 seconds or so. At 75% / 50% / 25% health he will stagger and you can keep attacking him for massive damage.

In the second phase he starts using a sword. Two of his moves give you a good opening for attack: when he lifts his sword high up in the air to hammer it down to the ground, deflect that move. It will stun him and put you under his belly so you can attack freely for a few seconds. The other move is when he leaps forward in your direction, you can jump above him to land behind him and do a few hits. Always run away from him unless he’s doing one of the two moves. Deflecting every single attack of his won’t work as he breaks your posture too fast, so run away and only deflect the heavy blow that results in him getting stunned. Refer to the video below to study his moveset of the second phase and memorize the moves that offer a chance for attack.

Where to go after Sunken Valley

After the Guardian Ape is defeated you unlock the Guardian Ape’s Watering Hole idol and can enter the cave that he was guarding. There you find a flower. If you haven’t finished the Corrupted Monk boss in Ashina Depths yet, you must go there next. If you already did that, you will notice the idols in Ashina Castle are now locked. You must return to Ashina Castle via the Abandoned Dungeon and reach the tower rooftops to trigger the game ending.

This concludes the “Sunken Valley” area.

Next up: Return to Ashina Castle Tower Rooftop through the Abandoned Dungeon to trigger the game ending, or defeat the Corrupted Monk boss in Ashina Depths if you haven’t already.

For all other areas check out the full Sekiro Shadows Die Twice Walkthrough.