Rough Landing is the fifth Story Mission of Shadow of the Tomb Raider and the first to take place in the games main area – Peru.

Lara & Jonah’s trip to Peru isn’t as smooth as expected. Their plane goes down, as seen in the very beginning of the game.

So, once again we are in an unpleasant situation – hanging from a tree in the remains of a small plane. Time to bail out and have a look around.

Make use of your survival instinct

to see the markers of the location you are supposed to go. It will also highlight plants and trees which can be collected 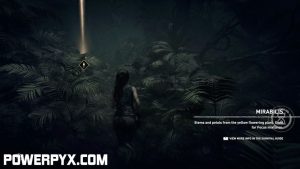 Eventually, you will come to a set of two climbable walls. 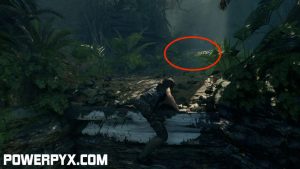 At the end, Lara spots the Silver Mountains – as well as a signal from a Flare Gun. This could be either Jonah or Miguel, the pilot. Time to head in this direction! 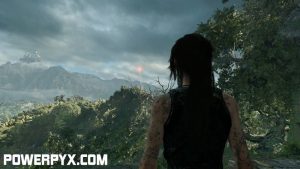 Head towards the Flare

Time for some traversal along cliffs and through the treetops and large branches. 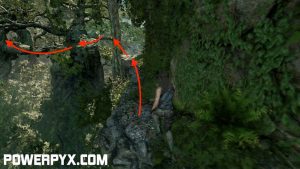 The way is very linear, once again. 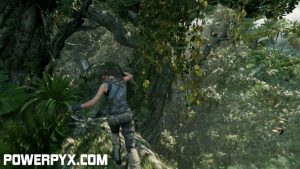 Eventually, Lara will swing down from a branch and into a large muddy section with a camp in front of her.

Have a look around the camp – there aren’t many clues around. It is the first campfire where you can use your earned skill points and change unlocked outfits, if you feel like doing it.

Find a Tool to cut down your Gear

A few meters from the camp you can already see some debris from the crash in the distance. Now, we need something to cut down our gear which is hanging from the trees. Use your instinct

and head over to the propeller from the plane, which is marked in blue. 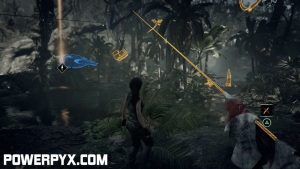 Eventually, the remains of the machine fall into the water and Lara has to take a dive herself to obtain a piece of the propeller. She will be attacked by a huge eel, but manages to break a knife-like part from the engine and stabs the slimy predator 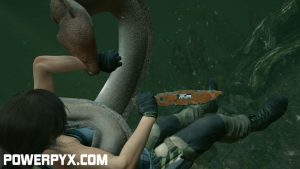 Cut the Ropes holding your Gear

Okay, now we have something to cut out gear from the tree. Or do we? Nope, the blade isn’t sharp. 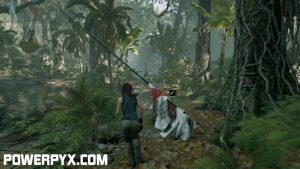 There are several boxes of salvage around, which are highlighted in blue, if you press

. One would be close to the water, another one on a plateau where the second rope ends and another next to the entrance to the Challenge Tomb. Once you have obtained three, we are ready to proceed. 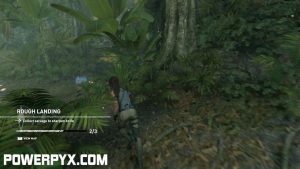 Sharpen the Knife at the Base Camp

Head back to camp and upgrade the knife according to the instructions on-screen.

Okay, second try. Knife is working properly now and Lara can cut both ropes to make her gear drop down. 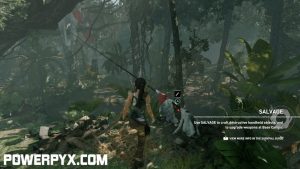 Head over to the case and interact

with it to reclaim your precious gear – including your bow and radio. 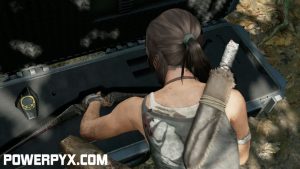 Speaking about radio – the pilot Miguel can be heard when it is switched on. So we have at least one survivor – that’s good!
Proceed straight ahead and use a rope arrow to climb across the large gap. 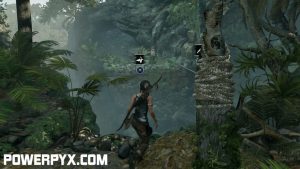 Just a bit around the corner we will see a signal flare and a lot of blood and some shoes. Not a very good sign.

Follow the trail of blood up the small hill and drop down a ledge. 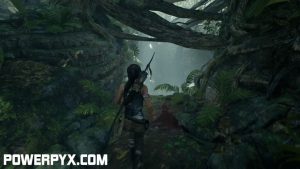 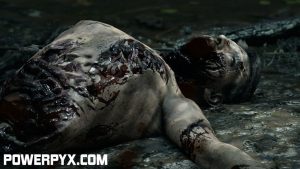 …some Jaguars introduce themselves. 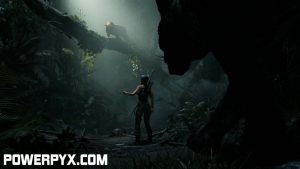 Make it through the Jaguar’s Territory

Now, Lara has to navigate through their territory, but won’t be attacked here. You will have to face them when sliding down in some sort of pit with a large tree in the middle 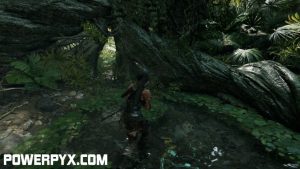 There is a total of two Jaguars who will come out separately. Once you have hit one of them, he will likely retreat for a few seconds and the other one will come out of its lair. Generally, you want to aim for their heads and make a quick headshot or two and press

to dodge, when they are about to attack you.
This might be the first time you actually need to heal yourself. To do so, hold

At some point, a cutscene will play and you have to move your left stick to the sides quickly

to stop the attack and Lara will pull out her knife and kill the first Jaguar automatically. The second one will now corner us and things aren’t looking very good for us, but the Jaguar retreats and takes the body of the other one with him. 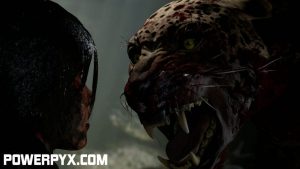 After collecting all resources

in the area, it is time to get away from this place. Climb out of the pit by jumping on the white marked wall. 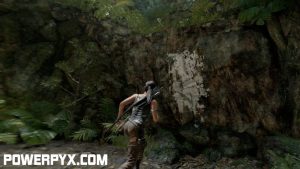 After a short walk you will see another part of the plane. Climb up the tree and the three walls and swing from a branch to slide through the debris. 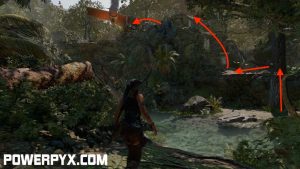 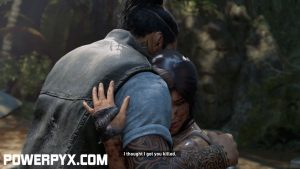 Time to proceed our adventure with a companion. Remove the barricade together and… 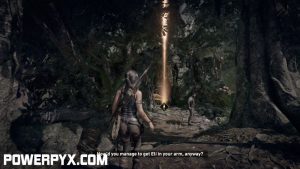 …climb around a small ledge. 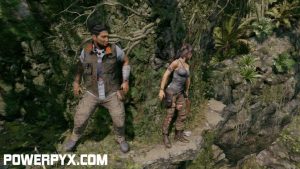 Shortly after this, you will come to this section – which is another small riddle. 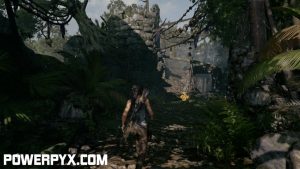 Climb on top of the tower and move the lever to control the flow of water. 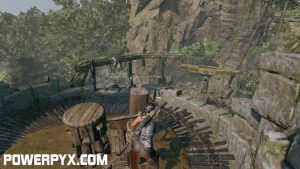 The next thing will be to push the beam marked in blue together will Jonah. This will make the structure marked in yellow go down and its rope-tethering-point usable.
After pushing the beam the first time, Lara & Jonah notice that the bucket is leaking and the structure moves back too fast. Push it a second time, and Jonah will try to hold it in place. You need to run down to the very bottom of the area,

to be able to connect the hanging bridge with the other rope-tethering-point.
Now, the bridge will be pulled up and we can cross it. 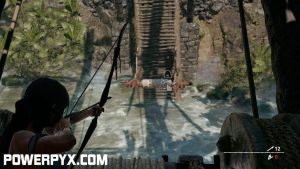 On the other side, there will be a stele and Lara will learn from its inscription to make use of plants to increase her perception. To try it out, hold 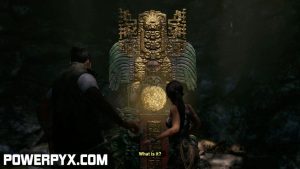 The village we were supposed to be flying to is now very nearby. 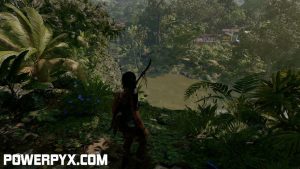 When entering the building below, Lara and Jonah will face another barrier. Lara will crawl underneath first, but

will be attacked by the nasty Jaguar once again. Jonah throws over the Flare Gun, so we can get rid of it for a second. 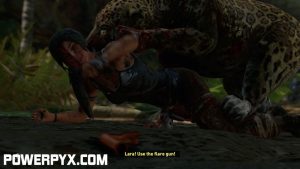 Now would be a good time to test out the newly acquired perception-skill. This will highlight all the animals in white and you can easily see, when the Jaguar is running towards you. This makes defeating it quite easy. 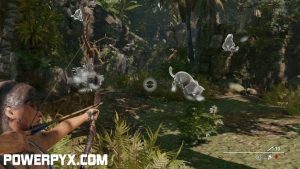 Go back to Jonah

Finishing off the second Jaguar will net us another story-related trophy.
Now it is time to get back to Jonah, who had to watch the fight from the other side of the barricade and wasn’t able to help. 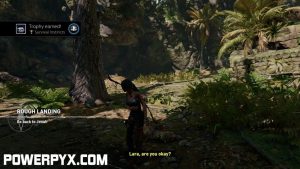 This will conclude this mission and a longer cutscene will play, with our two protagonists sitting at a fire and discussing people they’ve lost and they miss.

For all other main missions check out the full Shadow of the Tomb Raider Walkthrough.

Shadow of the Tomb Raider Wiki