None of these secret cars are missable. You can (and must) get them in Free Roam after the story. But first you’ll have to grab the 5 Post Cards, they are mandatory to make the Hidden Cars spawn (5 Post Cards and 5 Hidden Cars).

How to Get Post Cards & Make Hidden Cars Appear

First, beat the story. The post cards become available over the course of the story. After the story all 5 will be available.

Now load up the game in Free Ride mode (Free Roam) and go to Bertone’s Autoservice in Downtown. Enter this building and you’ll find 5 post cards on a noticeboard inside. Each of them shows you an image where to find the hidden car. You can grab all 5 at once and the 5 hidden cars will become available right away. You can grab them in any order. Below they are in the closest order.

Without the cards you wouldn’t be able to interact with the garages that contain the cars.

Downtown
In the west of Downtown go to map area named “The Waterfront” (at East River). There’s a wooden door you can kick open here, but you must have collected the above-mentioned Post Cards for the interaction to be possible. Behind the door are some crates. Be sure to bring a gun from the Armory at Salieri’s Bar (where you always start in Free Roam). Use the gun to destroy the crates, allowing you to reach the hidden car Trautenberg Sport at the end of the garage.

Central Island
In the south-east of Central Island, the Flame Spear supercar is simply standing around in a garage that you can easily access from the street. This is the fastest car in the game, with a top speed of 280 km/h (174 mph).

Works Quarter
In the middle of the Works Quarter district, go to the eastern wall of the map area called “Central Rail Station”. There are some boxes you can use to climb over the wall, leading to a labyrinth of crates. Make your way through the mini-labyrinth (you can only really go in one direction). At the end you’ll find a single garage with the Manta Prototype vehicle inside. 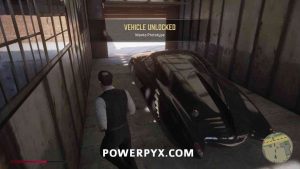 Countryside
In the north-east corner of the countryside, in a garage that’s easily accessible from the street, you will find the Disorder secret car.

Beech Hill
In Beech Hill, in one of the garages that’s accessible from the easternmost street, you will find the Lassiter V16 Appolyon. Beware of the car owner in the garage, he’ll try to fight you off when you enter.

That’s all of the Hidden Car Locations in Mafia 1 Remake: Definitive Edition for PS4, Xbox One, PC. You will receive the Car Thief Number One trophy / achievement after locating the last one.

For all other collectible types, please refer to the Mafia 1 Remake Collectibles Guide: