Iron Coffin is a Side Case in Sherlock Holmes Chapter One. This walkthrough will guide you through all objectives of the Iron Coffin side quest.

Friends in Low Places (missable), one of the three accusation sequences for

Guilty! – also unlocks 70 Money
Case Info: My curiosity has been piqued by talk that Basilio Copello, the owner of the famous Armour Copello home security company, has been arrested. His situation is quite peculiar: A man named Nicolo Detti has been found dead inside a safe in Basilio’s store. Basilio claims innocense, but the evidence is against him.

It’s only available after Main Case “The Muse From Abroad“. Then you can eavesdrop on two women inside the police station lobby to start the quest. The correct words to filter out are: Armour Copello company, Dead in the safe, Claims innocence.

Lawful Neutral – the very first thing you should do is put on the Police Uniform & Police Cap. For this trophy you must interrogate all suspects while wearing the Police Uniform, and do not tell them you’re not a cop (Basilio, Augusta, Billy, Felicia). So keep the uniform equipped throughout the case.

After you have the police uniform equipped, head downstairs in the police station. There you’ll find a man in a white suit locked inside a prison cell. Talk to him. Must say “I’m an honourable cop (lie)” for trophy purposes. Then observe him (eyes, vest, ring on hand, bruises on other hand). The correct character portrait is “methodical”.

After exhausting all dialogues, pin objective “Basilio Copello Testimony”. Go back upstairs in the police station and enter the “Inspectors” room. There talk to the woman, she’s the wife of our suspect. For trophy purposes, say “I’m new. (lie)”. Then observe her (eyes, harp pin on chest, ring on finger). The correct character portrait is “Shocked”. Exhaust all dialogues with her and then say “I’ll return later”.

Now we must head to the Armour Copello office, located in Scaladio, Adler St, east of St. Clement’s Cathedral.

Inside, talk to the man in the lobby (Billy Lloyd). Again, make sure you’re wearing the Police Uniform for trophy purposes! Exhaust all dialogues with him.

Inspect the 3 interaction points in this room – the paper inside the open safe, the paper to the right of the safe, the portrait in the corner.

In the same room, also inspect the small table by the fireplace. It holds 3 clues: wine bottle, wine glass on table, another wine glass below table (must use left stick to scroll down and look under the table).

First, we’ll check the right table, the one closer to the door we came from. It has 3 clues: white tickets on the right, little paper on left, bigger paper in top left under picture frame (rotate to view from behind).

Next, open your casebook and do a chemical analysis on “Examination of Nicolo Detti’s Body”. Solution shown below.

Now you can present all the evidence to Lloyd, who will be in the same room (wear police uniform for trophy purposes). Present him with all evidence you collected until he can’t be talked to anymore.

Then head through the door at the end of the room.

Once outside, pin objective “Armour Copello Burglary”, it has the eye-icon on it. This allows you to use concentration mode

to see clues. Go downstairs, you’ll see a dislodged railing where the burglar jumped down. Also check the grass below the railing. It reveals a pouch with lockpicks. Take them.

Rotate the lockpicks for 3 clues: the letter “F” on the front, the phrase “Passe-Muraille” on the back, the lockpicks themselves which you can view by rotating to the top. When done, Sherlock should take the lockpicks and remove them from the ground. You should also get the “All Evidence Collected” notification. That’s all we can do here.

Keep objective “Armour Copello Burglary” pinned. It should only have the “book-icon” on it now. We must head to the Archives in the Police Station where the case started. Filter by: Crimes = Property Crimes / Evidence = Instruments of crime / Districts = Grand Saray. From this we learn our suspect is called Felicia Sevigne, a known criminal associated with the Backyard Boys gang.

Pin objective “Profile of Felicia Sevigne”. We must head to the Backyard Boys hideout, located on Clay St, in central Miner’s End. See the exact location below. However, do NOT enter the hideout yet. A missable trophy takes place here.

Friends in Low Places – BEFORE heading into the Backyard Boys Hideout, eavesdrop on the two gang members in front of the entrance. See location below. The correct words to filter out are: Marketplace in Miner’s End, Beggar Informants, Limping brass.

We learn that there’s a guy called Pipe at Miner’s Market. Track objective “Thinning the Ranks” and go to Miner’s Market in the center of Miner’s End (location shown below).

BEFORE talking to Pipe, you must put on beggar clothes to get the trophy. If you have the wrong outfit the objective will fail and the trophy will be missed! There’s a clothing trader on the market if you need to rent or buy them. NOTE: This won’t void the trophy for talking to everyone in police uniform, because Pipe doesn’t count as a suspect, so you can change out of the Police Uniform for this one, but must change back to it afterward.

Now talk to Pipe, he’s the bandit standing left of the “Cheap Antique Trader” merchant (circled red below). He has a round top hat, a bandana on his face, a blue shirt, brown long trousers, arms crossed in front of his body. Say “There is no attack (Easy)” and the Friends in Low Places trophy should unlock after the conversation. 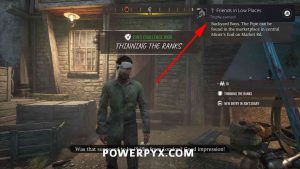 For trophy purposes, remember to re-equip the Police Uniform & Police Cap immediately after! Now track objective “Profile of Felicia Sevigne” and head back to the Backyard Boys hideout. This time, enter through the big green main gate. Defeat the bandits inside. Doesn’t matter if you arrest or kill them.

Back at Police Station (Case Conclusion)

After clearing the hideout, a short cutscene will trigger and you automatically arrest Felicia and respawn at the Police Station in front of her cell. Step inside and talk to her. Be sure you got the Police Uniform equipped! Observe her (shoulders, white pearl necklace, torn trousers). The correct character portrait is “Prepared”. Exhaust all dialogues with her.

Head back to the Inspectors Office and talk to Augusta again (wear Police Uniform).

Lawful Neutral for having interrogated all suspects in Police Uniform. Immediately talk to Augusta again > “Accuse” > MUST PICK THE 3 CORRECT ACCUSATIONS: Business Affairs, Letter to Felicia, Lawyer’s Letter. Then say “You are guilty”.

If you pick the dialogues out of order the accusations won’t work correctly, you must have went through the other dialogues with her first. Picking the 3 correct accusations here counts towards

Guilty!. For that trophy you must also pick the correct Accusations in Side Cases “Love, Death, and Cordona” & “Blindsided”, so if you haven’t done those it won’t unlock the trophy yet.

After making the accusations, Augusta will admit to being guilty of Nicolo’s death and she’ll sit down with the Police Inspector to confess. The case ends here. You get 70 Money as a reward.

This finishes the Iron Coffin side case in Sherlock Holmes Chapter One.

For all other Cases, view the full Sherlock Holmes Chapter One Walkthrough.

Guardians of the Galaxy Trophy Guide