This Judgment (Judge Eyes) walkthrough will guide you through all the main choices and investigations of Chapter 6 for 100% completion.

There are 3 spots you can view on this first image, though the only required one is the research wing search point. 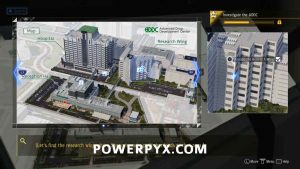 On the second page there are 2 spots you can view, but the required one is the Security Gate leading to the research wing, on the right side of the 2F diagram. 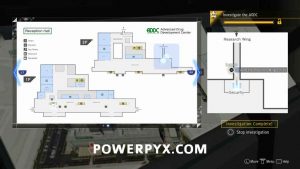 After this you’ll be stopped by the receptionist and introduced to a research assistant who can take you to Shono. Once you’re in the lab, head over and speak to Shono.

Select Choice:
(Doesn’t matter, no choices give actual information and the following events are the same regardless)

In the next scene when you’re out in the skybridge:

Select Choice:
Was it when I was talking to Ayabe?

You’ll now be back in Kamurocho, and have to wait for Sugiura to call you about what he finds out. When you walk anywhere you’ll be quickly stopped by a man who introduces the investing mechanics, run through the Quickstarter app. Using it isn’t required for immediate story progression, but you need to invest in everything for City Mission completions. When you’re ready to progress the story head to the marked area that is just in front of Tender and look at Kaito and the guy he’s with.

Yagami agrees to let Kaito go and work Bodyguard for an old school friend named Adachi. A bit of time apparently passes and you need to go check on them at the address of Adachi’s company. It won’t be marked on the map, but you should head over to the location indicated on his business card, Tenkaichi Alley, Yoshikawa Building, 3F. Head over there and you’ll see Kaito with a bunch of injured looking guys on the ground around him. You’ll next have to get info on the guy that Kaito is working for.

You can head up to the Turtle Financing break room for one intel source. Talk to Kamaguchi (if you haven’t met him yet he’ll be outside the building on the ground, choose to step in and take out the thugs) and he’ll basically tell you Adachi is a bad dude, and you’ll then have to go speak to Kaito about it. You’ll next need to go to Kanrai to check up on what he’s up to. When you get inside put on your Stakeout disguise before heading near them to eavesdrop. You’ll meet Kaito outside, then have to fight him to stop him going with Adachi. You then have to fight Adachi and a group of thugs he calls over. You have a nice interaction with Kaito, then end the case.

Sugiura will now give you a call, and ask you to meet him over at Koi Bride. He tells you a bunch of info related to the ADDC and the development company that was posted in an article the prior year by your favorite reporter. Head over to Genda Law Office to meet him, though he won’t be there anymore and you’ll have a conversation with Mafuyu instead. When she leaves speak with Hoshino to tell him about what Sugiura found out. He’ll then call you and say some Yakuza looking guys were tailing Mafuyu, and you head over to help.

Follow the map marker and you’ll fight through three groups of thugs, then you’ll have a talk with Mafuyu.

Choice:
Because you know me (Probably doesn’t matter)

Sugiura will give you a call again, and get you to go to Cabaret Honmaruen on the North part of the map, where the men from the van have gone. When you get there you’ll go inside, and have to fight through a few groups of guys. Once you get past the second group and end up in the locker room, head to your right between the two rows of lockers and pick up the Honmaruen key, then continue forward using it on the door with

When you get out into the red carpeted hallway, instead of going to the marker take the first door to the right that’s locked, then open the door in that room with a Thumb Turn Bypass. In the next hallway you pick up a skill book on the floor that lets you purchase EX Reverse Beatdown from the skills menu. You can then head into the rooms across the hall for an item or two, but you can’t get into the final few rooms right now. Head to the marker when you’re ready and continue fighting through the groups of thugs.

Once you get to the final room you have a large fight against Shioya and a large group of thugs. Once you down all the thugs and get Shioya down two health bars he’ll call them all back up and start using his unblockable attacks. Make sure to make good use of the room size and your healing items, and use your EX Boost if you need to stop him doing too much damage with the unblockables. You can also do hugely damaging combo EX attacks with Saito if you are near him at the correct time.

Once you defeat him, the chapter ends.

This concludes all investigations and main choices in Chapter 6 of Judgment.

For all other chapter Walkthroughs, check out the complete Judgment Story Walkthrough.