The Iniquities of History Starting Location

The Stranger Jeremiah Compson can be met sometime in Chapter 3 on a bench in front of Rhodes’ Train Station. He seems to be homeless and drunk.
He will tell us that he lost everything – his house, valuables, work and honor. The latter two are hard to restore, but Arthur agrees to keep a lookout for his valuables: a watch, a pistol and a ledger.

Jeremiah’s house is located to the north of us and can be entered from the southern side. His watch will be located on the chimney in the first proper room. Interacting with the picture on the other chimney across will reveal that there is a trapdoor in the room and also introduce a pair of squatters threatening us.

Arthur can either use the provided knife to take out the attackers or also switch to a weapon quickly, using Dead Eye.
Once the threat has been taken care of, pick up the dropped gun, interact with the trapdoor in the middle of the room and head down.
His ledger will be at the end of the basement, sitting on a crate to the right.

Seems like he was involved in Slavery. A quick way to lose our sympathy and pity for him. 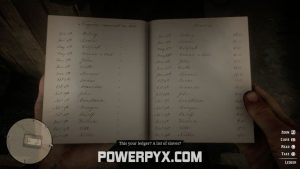 Head back and confront him about it. After standing up for his beliefs and rescuing his ledger which Arthur threw into the fire, he will eventually kneel on the floor and the mission will end. Killing him actually increases the honor ranking and feels like the right thing to do.